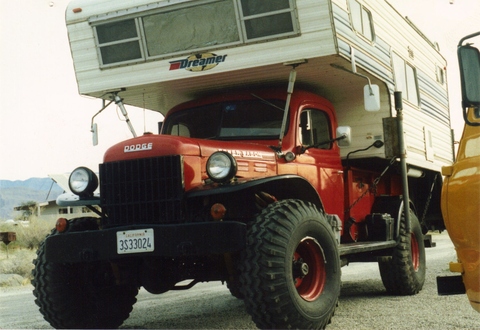 The Dodge Powerwagon was built between 1945 and 1981. This one is circa 1955  These trucks were a light duty four wheel drive vehicle.

The first of the these trucks were based on the design of Dodge 3/4 ton WC military trucks. Dodge entered the commercial market with one of the first four wheel drive trucks.  The first Powerwagon was introduced in 1946. The cab was fully enclosed featured a eight foot bed or cargo box. The fenders are all exterior.  The wheelbase measures 126 inches.  The engine is a 230 cubic-inch flat head inline six.  There is a two speed transfer case along with a 4 speed manual transmission.

Mounted to this beast of a truck is a circa 1976 Dreamer 9.5ft cab over slide in camper. The Dreamer was built by Travel Industries Inc. The company was one of the leaders in the truck camper market.