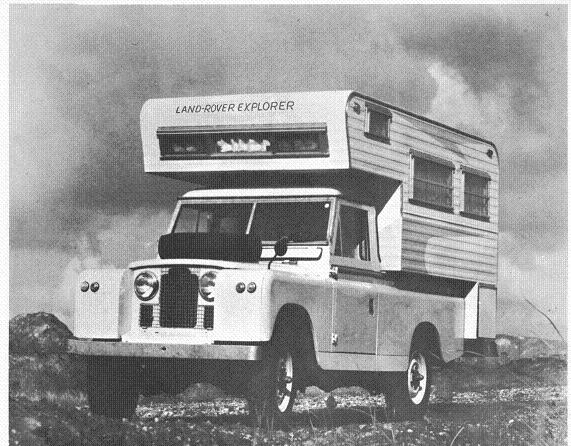 The Land Rover Explorer is a combination of a 1965 Land Rover 109 pick up  and a detachable camper unit. The engine is a 4 cylinder with 77 horsepower.  The Land Rover Explorer was offered to meet the increased demand from campers and outdoor adventurers. The answer is this light-weight, comfortable unit that could be transported on a 4-wheel drive Land-Rover. The Land Rover provided the the option for an off-highway site and deposited, leaving the basic vehicle as unencumbered transportation. This camper weighs 590 pounds, it will sleeps 4, plus a has a galley and dinette.  This camper will sleep four. It is equipped with a mar-proof fiberglass galley complete with stove, ice box, water and electrical system, and has storage facilities and a dinette. The camper unit is of heavy aircraft. 025 aluminum.

The camper called the “Dreamer” was built by Travel Industries, Inc. of Oswego, Kansas. It was in business for nearly 45 years. This company was owned by Bud Coons, one of the members of the RV Hall of Fame and a pioneer in the Recreational vehicle business. He was instrumental in convincing truck manufactures to built trucks capable of carrying campers.   In 1957 Bud Coons and his brother were building campers in Pomona, CA, with distributors nationwide. To expand the business, Bud relocated to Southeast Kansas. The first “Dreamer Coach” for pick-up trucks was manufactured in Oswego, KS, in May 1959.  Bud Coons created Travel Industries Incorporated in the 1960s and committed to the construction of the Dreamer range of recreational vehicles.

Land Rover, Founded in 1948,  is a brand of the British car manufacturer Jaguar Land Rover, which specializes in four-wheel-drive vehicles. Jaguar Land Rover is headquarters in Whitley, Coventry, was acquired by Tata Motors, an Indian company, in 2008.