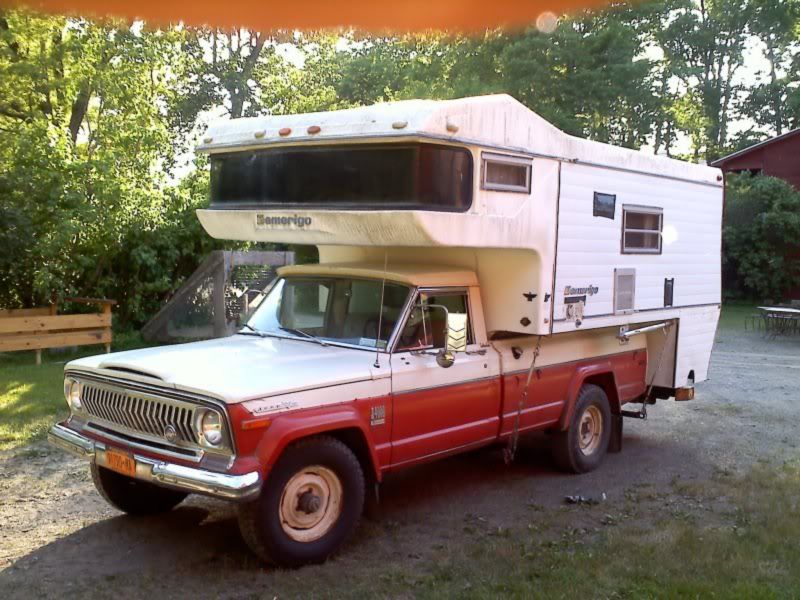 Here is an Amerigo fiberglass cab over camper mounted on a Jeep Gladiator J4000 four wheel drive truck.   The camper has a side access door and a rear tilt back. To accommodate for the side access the camper is 11 feet providing some overhang at the rear of the truck.  The fiberglass adds some style lines to the camper’s design. The cab over in the front is tinted wrap around glass.   These is also a rise in the roof to allow for additional head room in the cab over section.

Amerigo campers utilize a one-piece fiberglass roof and front section to provide weather resistance and ease of maintenance. The camper also includes a fiberglass shower stall.  The side walls are made of wood frame.  The frame is secured by glue and screws.  Each stress point has addition reinforcements. The Amerigo has a 1-1/2″ thick insulation to provide a climate controlled environment. The one piece fiberglass roof and front section create an appealing look.  The air flow conception of the front provides minimum wind resistance.  The Amerigo was built by the Gardener, Inc company located in Bristol Indiana.

The J4000 Jeep featured a AMC 360 2 valve v8 engine. It is 4×4, with lockout hubs, 4 speed transmission. This is a full-size pickup truck based on the large SJ platform that was built and sold from 1962 to 1988. The one shown here is circa 1972. That would be due to the J4000 badge on the side.  The body style is a 2-door pickup truck.  The chassis layout is a front-engine, four-wheel drive.  This one because of the year was pre Chrysler and most likely built by American Motors.

American Motors Corporation (AMC) was an American automobile company formed by the 1954 merger of Nash-Kelvinator Corporation and Hudson Motor Car Company. AMC purchased Kaiser’s Jeep utility vehicle operations in 1970.  The company became defunct 1988 and was sold the Chrysler. It’s headquarters were in Southfield, Michigan, United States. Production of the full-sized pickups ceased after 1987.