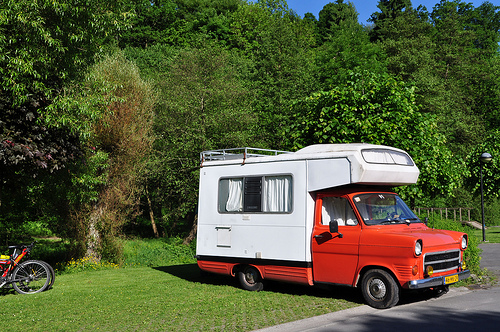 This charming truck camper should bring a smile to you and brighten you day.

Here is a classic Ford Transit MK1 with a CI (Caravans International) camper. It is considered a Class C motorhome because the chassis mount camper has a full walk through to the living area.  From the design of the grill the year of this vehicle is circa 1977.

The Ford Transit was introduced in 1962 and has been one of the most successful commercial vehicles. It is considered a light commercial vehicle. The Transit is an international collaborator between Germany and the United Kingdom. There were many different permutation of the model including the pickup truck, van, minibus and motorhome.  You will find the Transit mostly in Western Europe and Australia.

The MK1 is the first generation design of this model by Ford.  It has at relatively short wheel base and a single rear axle. The engine is a short V4. The size of the engine provides additional space to place the engine in front of the driver. The transmission is a 4 speed over drive gear box.

The camper sleeps 4 occupants. It was manufactured by CI Autohomes which is a division of Caravans International that was founded by RV pioneer Sam Alpers. It was once the largest manufacture of RV’s in Europe.  The style of the camper was done by Olsen Design. The roof is a one piece fiberglass molded for great weather sealing properties.  The vista windows on the side allow plenty of sunlight and help make this fell more roomy.