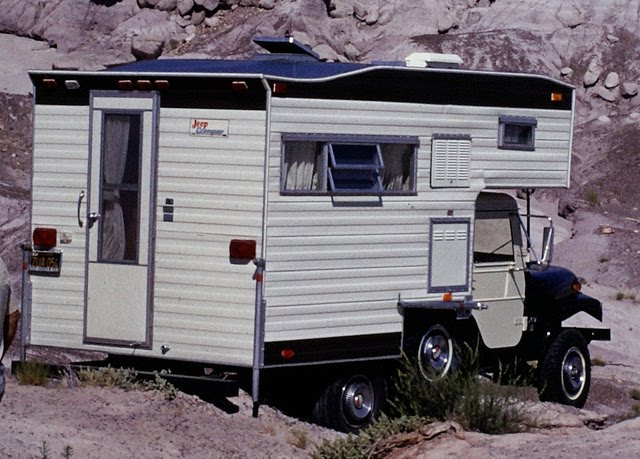 What a terrible situation to be in.  This photo was taken sometime in 1969.  Here we find a CJ5 Jeep Camper perilously dangling on a cliff in the Petrified Forest.  At the time this was a Brand New unit that had lost control.  The story is that someone forgot to set the parking brake.  As a result is started rolling down toward the bottom of the Petrified Forest.  Of course there could be a different story…

The CJ5 Jeep Camper option is probably the rarest Jeep option.  In 1969 Jeep decided to enter the recreational vehicle market. It was during this time that the RV industry was in full swings and popular with outdoor adventurers. The camper idea came from Chuck Prater who designed and patented this concept.

Along with the CJ5 Jeep Camper the company introduced the Jeep Gladiator with the ability to add a slide in camper. Also they marketed the Wagoneer as a vehicle capable of towing travel trailers. The CJ5 Jeep Camper came with a factory installed El Dorado cab over camper that extended over the seating area of the vehicle.  El Dorado were built by Honorbuilt Division of Ward Manufacturing. The camper fit on the CJ5 bed and extended way beyond the back of the vehicle that and extra set of axles were needed to provide stability. The camper could be removed. To do this there was was small opening in the floor of the Jeep. Through this hole was a large pin that connected the camper to the vehicle frame. The camper sleeps four occupants.  Two people sleep in the cab over section and two more by converting the dinette into a bed. The unit included a stove, refrigerator,  water system, marine toilet. It is estimated that only 336 of the camper units were built in 1969.  Jeep was subsequently bought out by AMC and production ceased.  As of this writing there are only 4 known in existence.  This is truly an endangered species.  If anyone out there knows of one, share your discovery in the comments.

The Petrified Forest is located in the Navajo and Apache counties in northeast Arizona.  It is a designated National Park. The name come from the fact that there are huge deposits of petrified wood.  The park is cover around 146 square miles.  The area is semi-desert shrub steppe.  The land is also highly eroded and colorful badlands

In this are explorers can find an abundance of fossils, mostly from fallen trees from the Late Triassic era.  In the sediments can be found fossils logs.  These are part of the colorful Chinle Formation.  These amazing formations is where the Painted Desert get its name. The area a forms by the Colorado Plateau pushing up with great tectonic force.  Most of the fossils are of various plant leaves.  There are also some amphibian fossils as well.