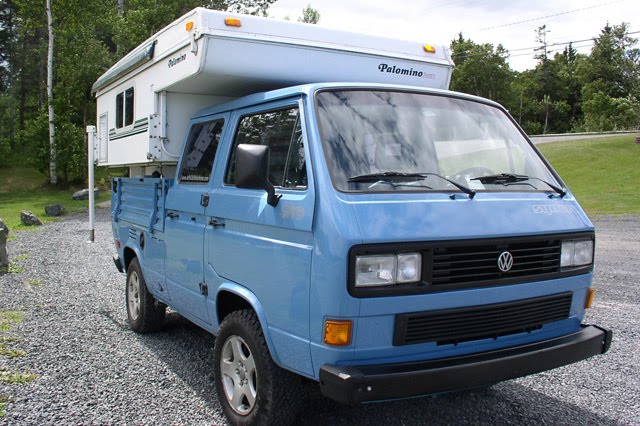 Here is an unusual combination. This is a Volkswagen DoKa truck with a Palomino Bronco 600 popup truck camper. The Palomino is great match for this truck.  It size suits it well. The side panels fold down allowing access to some storage.  When mounted on the bed of this truck it creates a void that allows for storage.

This particular Volkswagen is not very common. It’s an actually a one ton pickup. But it doesn’t have a whole lot of power. This DoKa truck is based off the Volkswagen microbus.

This Volkswagen pickup truck is very rare in the United States It was never officially imported here. However only 18  have shown up in North America. DoKa stands for a double cab allowing for extra seating for the passengers  The engine is a 2.1 liter diesel horizontally opposed 4 cylinder engine. The transmission is a synchro AWD system. The engine is water cooled. It is a rear engine vehicle.

Volkswagen is a German auto manufacturer that was established in 1937. Volkswagen means “people’s car” in German. Volkswagen’s were first brought to the United States in 1949. Volkswagen of America was formed in 1955. The Beetle became quite popular and iconic car for the sixties. Many Volkswagen’s have found their way in dune buggies and off-road vehicles.

The Palomino 600 is a pop up truck camper. It weighs about a thousand pounds. Overall length is 11 feet, floor length about 7 feet 4 inches. It is perfect for smaller vehicles. Interior height is 6 foot 4 when the top is up. It has a 10 gallon freshwater tank. It includes a porta-potty and 20 pound propane tank. The Bronco folding truck campers are perfect for the back roads. They are lightweight slide in mounted campers ideally suited for trucks with a low profile. The popup top enhances fuel efficiency and makes it easier to handle on the road. The popup roof also increases living space making for a roomy interior.