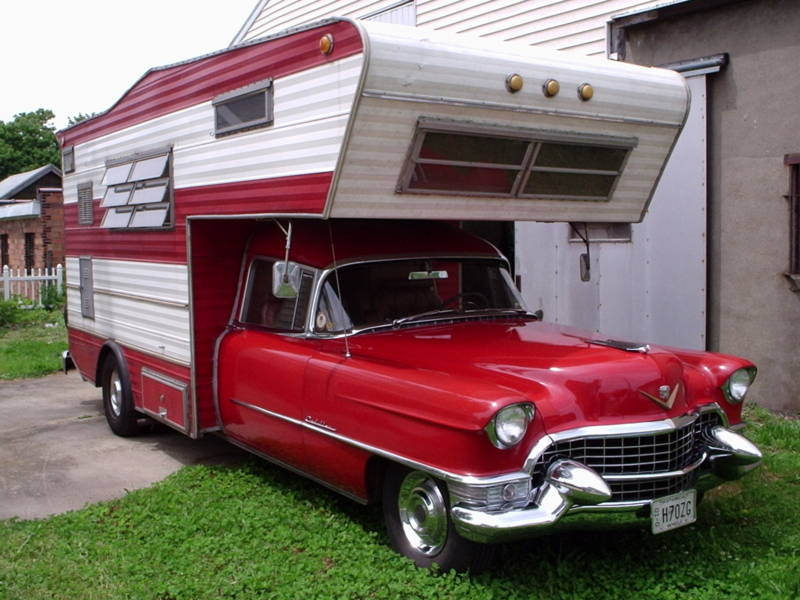 Here is a unique Cadillac camper combo. The camper is chassis mounted to a red 1955 Cadillac. For its age it is well preserved.  It looks like the owner took good care of this vehicle.  For the most part this car has the original engine and transmission but to handle the extra weight of the camper a dually DANA 70 rear end was installed.  This provides additional GVW rating.

The camper is fully self contained.  It includes a bathroom with shower.  It has a galley that includes a stove and refrigerator.  The refrigerator uses both 12 volt and propane to keep food and beverages cold. This camper is a factory built unit from Superior Coach Company sometime in the late 1950’s to early 1960’s.  Superior Coach formerly built school bus body and professional car manufacturer, but today it focuses on building hearses

The Cadillac was designed by Harley Earl.  He was the head of design at General Motors (GM). His innovative designs helped make GM a leader in the auto industry.  He was an talented industrial designer and pioneer.  When designing cars he used innovative methods like free form sketching and hand sculpted clay models when creating a cars designs. He is also introduced the idea of “concept cars”.  The concept car allowed car makers to test and market new ideas in car styling.

One of Harley Earl’s ideas was the the Cadillac. This car is part of General Motors (GM). It was marketed as a luxury car. This is a distinction that Cadillac holds worldwide. The Cadillac is one of the oldest automotive brands in the world.  Originally it was a part of the Henry Ford Company but the company allowed the car to go dormant.  However it was resurrected by GM around 1909.  The name is derived from the name of Detroit’s founder Antoine Laumet de La Mothe, sieur de Cadillac. The distinctive logo is based on Cadillac’s family coat of arms.

Some of the unique features of the 1955 Cadillac include these things…  The car’s grill is a cellular insert.  The front bumper appears like inverted gull wings.  Mounted to the bumper are two tapered Dagmar bullets.  Dagmar is a slang term for the artillery-shell-shaped styling elements found on the front bumper it is derived after actress Dagmar (Virginia Ruth Egnor) who was well known for her busty cleavage.  The headlamp bezel are chromed to make them stand out. And let’s not forget with the distinctive GM “eybrow”